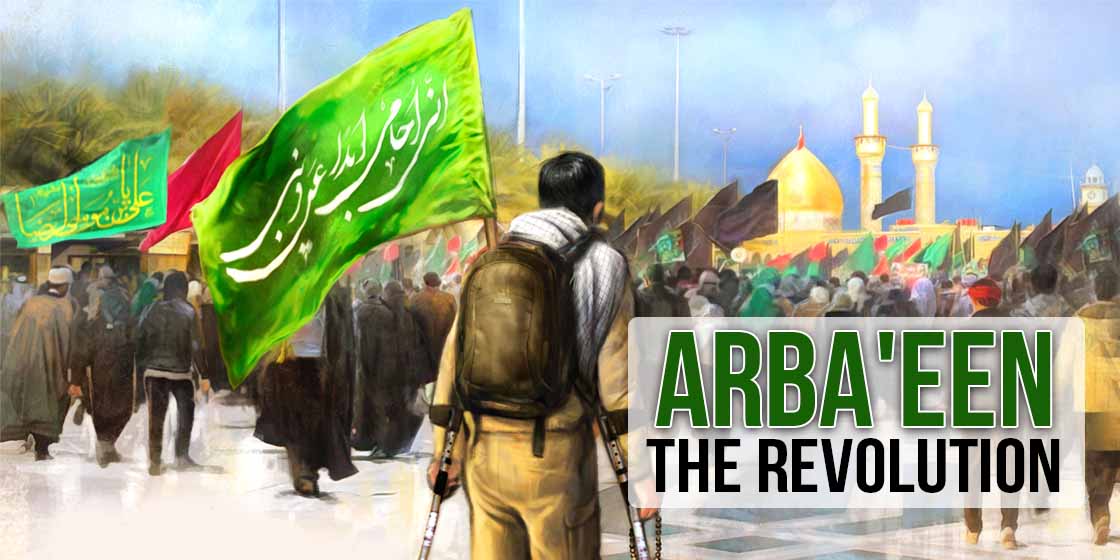 The story of the barbaric killing of Imam Husayn (A) and his followers in the Battle of Karbala is famous amongst Muslims, yet the reverberations of this battle 1400 years later are rarely discussed. It is the ultimate and most powerful story of good against evil, justice against oppression, sincerity and honesty against malice and cowardice. The victory of good against evil is what guaranteed the future of Islam, and Karbala even in our modern world serves as a model on how to defeat pure evil, no matter what. So, the annual pilgrimage to visit the Shrine of Imam Husayn (A) is also the annual affirmation that evil will always be defeated.

The true battle cry after Karbala is sounded by Lady Zaynab (S) at the court of Yazid in Damascus, after she and all the surviving family members had been marched there from the desert of Karbala, present day Iraq. Ibn Nama and Ibn Tawoos say that Zaynab, daughter of Ali Ibn Abu Talib (A), responded to words of Yazid with this speech:

“To Allah is my complaint, and upon Him do I rely. So, scheme whatever you wish to scheme, and carry out your plots and intensify your efforts, for by Allah, you shall never be able to obliterate our mention, nor will you ever be able to kill our inspiration, nor will your shame ever be washed away. Your view shall be proven futile, your days numbered, and your wealth wasted.”

The words of Lady Zaynab ring true, because all of Yazid’s efforts in the end turned out to be in vain: her speech shook Yazid’s court, and he had to allow the captive family members to leave Damascus, for fear that there would otherwise be a great revolt against him. Zaynab had already enraged the hearts of the people of Damascus with her fervent sermons.

The ultimate and timeless battle of good against evil:

The character of Imam Husayn (A), the third Shia Imam, is so perfect in every aspect that he is the most potent and impassioned hero of our common human history. He is often described as a model in his youth, in adulthood, then as a fighter in battle; there is not one aspect of his pure personality that is not worth emulating.

Imam Husayn’s (A) quotes have entered popular memory and his comments are some of the strongest utterances against oppression. Here are some examples of the Imam’s words:

“The true life is all having a strong idea and striving (for that idea).”

“People are slaves of this world, and religion is merely on their tongue. They keep it as long as it meets their comfortable life, but when the test comes, religious people become very few.”

“We are the mountains of forbearance and nothing can move us.”

However, Imam Husayn (A) is not just famous for his steadfastness, his bravery and his martyrdom; he is also revered for his humility, his patience and his generosity. It is narrated that very often, people sent him gifts and presents, but he gave them all away to the orphans, the widows and poor people. “No one had the patience of Imam Husayn.” When Imam Husayn (A) was questioned on why he was spending time with some poor people in Mecca, he answered that “I thought I would hear the woes of these poor people in detail and lighten the burden of their hearts.”

The martyrdom of Imam Husayn (A) was so significant that it is reported, “the heavens rained blood. When it dawned, our buckets and jars were full of blood.”

These are some of the many reasons that Arba’een takes place every year, and why it is in fact a growing phenomenon. Imam Husayn (A) has inspired humanity to fight evil, to safeguard what is valued (freedom, justice, honesty) no matter what the personal cost may be.

Arba’een is “one of the largest pilgrimage gatherings on Earth, in which up to 45 million people go to the city of Karbala in Iraq.” In the Western media that does cover the event, it is described that “during a 20-day period …people take to the roads in an elaborately organized and well protected mass movement, not seen anywhere else in the world.” In the media from West Asia it is described as dwarfing “every other rally on the planet, reaching twenty million last year. That is a staggering 60% of Iraq’s entire population, and it is growing year after year.”

What is truly inspirational and humbling is that in the aftermath of the Haiti earthquake, within 5 months, 4.9 million meals had been delivered by the UN Food program. Yet during Arba’een, about 700 million meals are prepared for the pilgrims over a two-week period, by poor laborer’s and farmers who starve to feed the pilgrims, and who save up all year round so that visitors are satisfied!

What does Arba’een really signify in our modern times?

This is Imam Jafar-e-Sadiq (A)’s hadith on visiting Karbala: “If one of our Shia goes for Imam Husayn’s ziarat, then he will not return but all his sins will be forgiven. For every step that he or his mount takes, 1000 virtues are written for him, 1000 sins are forgiven and his status is elevated by a 1000 degrees.” Taking part in the Arba’een Walk year upon year becomes more publicized, and many Muslims will seek to participate.

“The revolution of Imam Husayn (A) was not merely an event which had taken place by chance. It was rather a movement for the revival of Islam.” Of course, this movement has grown so much that it is now a stand-in for all salvation movements. All of them are inspired by the revolution of Husayn; “Karbala is the luminous torch of human salvation which is lighting forever the peak of Islamic history to awaken all people throughout the ages.” Thus, the movement of Arba’een is the most grandiose example of a celebration of rising against tyranny, oppression and injustice. It is narrated that Imam Husayn (A) said to Marwan Ibn Hakam: “Farewell to Islam, if the Islamic Ummah is stuck with (a ruler) like Yazid.” When he was asked to pledge allegiance to Yazid, he said to the governor of Madina, “One like me does not pay homage to one like Yazid.”

The greatest hope however is that unlike Husayn, when the Imam of our time comes forward, he will have more than only 72 followers. It is written in the books of history that the people of Kufa sent thousands of messages to Imam Husayn (A) in which they expressed their “serious determination to support and sacrifice their souls and fortunes for him.” However, they failed to support their Imam – will today’s Ummah behave differently towards their Imam?

Some of the strongest words used to describe the kind of loyalty required is the commitment made by one of the older companions named Muslim Ibn Awsajah, who declared that they were “all one solid rock to fight for the Imam. If they were killed 70 times and then were made alive again, they would still prefer to achieve martyrdom with the Imam rather than live with the oppressive rulers like Yazid.” Ayatullah Murtadha Mutahhari describes the modern relevance of Husayn’s Revolution, “Imam Husayn (A) wrote down with his own blood his epic on the airwaves of everlasting frequencies…he wanted to win the “media” war in order that the news of his revolt travelled far and wide. This is the rationalization of the revolutionaries and martyrs.”

Indeed, the media war is just about being won. Husayn’s Revolution and its commemoration in Arba’een are becoming victorious.