Enjoining the Good and Forbidding the Evil

Enjoining the Good and Forbidding the Evil 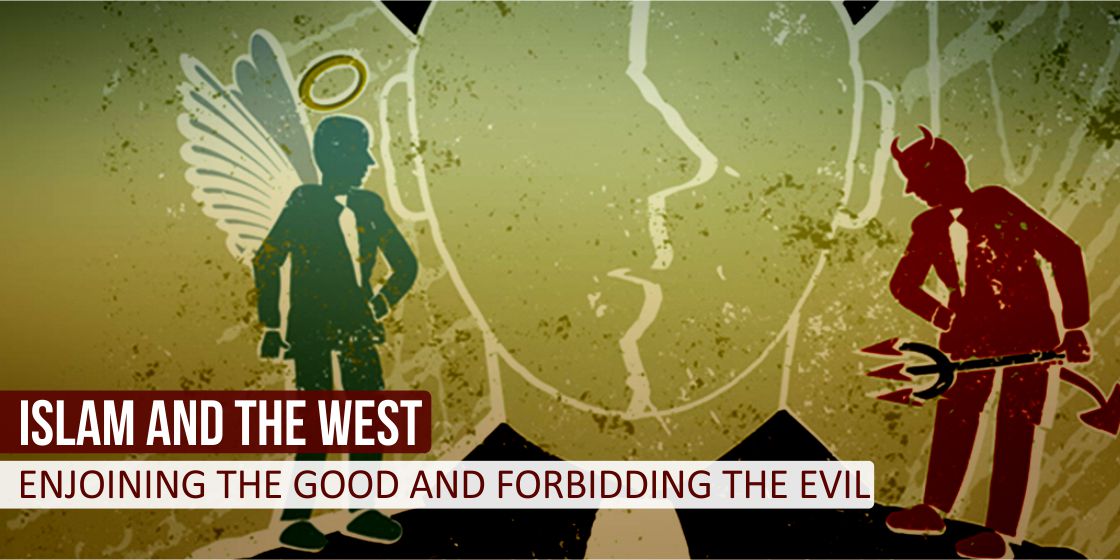 The concept of enjoining the good and forbidding the evil is a fundamental aspect of Islam, and yet it is a controversial topic, particularly for Muslims living in the West.

With the increased acceptance of liberal ideology and individualism within Muslim communities in the West, the notion that one has the responsibility to enjoin the good and forbid the evil is seen as an intrusion upon another’s rights and freedoms. Words such as “freedom” and “democracy” are often used to counteract the idea that human beings have an obligation to instruct and guide one another, and it can be difficult to understand the correct Islamic viewpoint after being bombarded with such appealing notions. Therefore, it is necessary to analyse this concept’s foundation, origins, and necessity in light of the current ideological climate of the world.

The Source of Authority

“And (as for) the believing men and the believing women, they are guardians of each other; they enjoin good and forbid evil and keep up prayer and pay the poor-rate, and obey Allah and His Messenger; (as for) these, Allah will show mercy to them; surely Allah is Mighty, Wise.” [2]

“What gives someone the right to tell me what to do?” Frequently and with great misfortune, young Muslims living in the West find themselves resentfully asking themselves this question whenever their actions are criticized, falsely concluding that nobody has the authority to regulate the behaviour of another. As such, the concept of enjoining the good and forbidding the evil is seen as unnatural and undesirable. However, to investigate this further, one must examine the foundation and origin of this concept. The roots of the concept can be divided into three categories: Fiṭrah (primordial nature), ʿAql (intellect), and Waḥy (revelation).

The Fiṭrī, or innate, aspect of enjoining the good and forbidding the evil can be observed in nature and human societies from the beginning of history.  An example found in nature is the desire of parents to provide benefit for their children and protect them from harm. This natural instinct is evidence of an innate desire not only for self-preservation, but also for desiring goodness for others.

Therefore, it can be observed that enjoining the good and forbidding the evil is from amongst the innate instincts of humankind, and it manifests itself through compassion and genuine concern for the wellbeing of others.

The intellectual reasoning behind the concept of enjoining the good and forbidding the evil is quite clear and self-evident. All rational human beings want to live in peace and comfort according to their own understanding of these concepts. This is achieved by satisfying one’s conscience regarding one’s own actions and whether they fall in line with an individual’s view of what is good and evil and ultimately creating and living in a society which is in line with this view. Whenever someone deviates from this method it is due to ignorance of the correct boundaries of good and bad, otherwise even humans who are seen as evil are conducting their actions based on their desire to carry out what they believe is good or bringing themselves and their society closer to their ideal state.

The verses of the Holy Qurʾān and narrations from the Prophet (SAW) and his progeny (AS) regarding the concept of enjoining the good and forbidding the evil are so numerous that it is impractical to quote them all. Therefore, it will suffice to mention some of them to understand that this topic has great importance in Islamic scripture.

“And from among you there should be a party who invite to good and enjoin what is right and forbid the wrong, and these it is that shall be successful.” [2]

“O my son! keep up prayer and enjoin the good and forbid the evil, and bear patiently that which befalls you; surely these acts require courage” [3]

“And certainly We raised in every nation a messenger saying: Serve Allah and shun Satan. So there were some of them whom Allah guided and there were others against whom error was due; therefore travel in the land, then see what was the end of the rejecters.” [4]

The Prophet Muhammad (SAW) also encouraged Muslims to perform this duty, stating that whoever performs it will be given the lofty rank of God’s representative on earth:

Imam Hussain’s revolution has great importance in Shīʿa Islam. Even though the Imam’s martyrdom is commemorated each year on the 10th of Muḥarram, the core reason for his divine mission is unfortunately often overlooked. The reason why the Imam rose in revolt against the tyrannical ruler Yazīd and his purpose for sacrificing himself, his family, and his companions was – in his own words – enjoining the good, forbidding the evil, and preventing the spread of corruption in the Islamic nation.

“Verily I revolted [against Yazīd] only to reform my grandfather’s nation. I want to enjoin the good and forbid the evil and take the course of my grandfather and father ʿAlī ibn ʾAbī Ṭālib.” [6]

Imam Hussain (AS) sacrificed everything to uphold this principle. Is this not enough evidence for the importance of carrying this out in our own societies, too?

The Liberal Ideology of the West

Due to Western cultural hegemony, liberalism has become widespread in my parts of the world, and as such is a powerful factor in shaping peoples’ worldviews. Of course, there are many forms and interpretations of liberalism which often contradict each other; however, for the sake of brevity, only the dominant understanding in today’s world will be discussed. Liberalism, therefore, is a movement for the preservation of individual freedoms [7]. American popular culture – an important bastion of liberal ideology – is now the dominant culture in the world due in part to its extensive media reach, leaving very few societies and cultures unscathed. In Western societies, the notion of absolute personal freedom has become ingrained in the minds of the people, such that any alternative outlook is automatically considered to be backward and antiquated. Liberal ideology suggests that a person should be able to do anything they wish as long as it is not against the ever-changing laws of the land and it does not take away or conflict with the rights of others. This leads to a dilemma for Western societies, as different people have different ideas of what exactly constitutes a “right” and to what level conflict is acceptable, leading to confusion due to undefined boundaries. Nonetheless, this ideology underlies the social fabric of these communities and is prevalent amongst the population and culture regardless of which political party holds power at any given time.

The implications of such an ideology are that individualism and self-expression are viewed as the peak of human perfection [8]. Everyone must be accepted not in spite of, but rather because of their differences. An individual’s personal choice in regards to lifestyle, sexual orientation, behaviour, dress, and beliefs are to be celebrated rather than regulated, regardless of how destructive they might be to the individual and society.

In such an environment where individual freedom is placed above all else, the notion that human behaviour should be regulated is naturally rejected. Ayatollah Miṣbāh Yazdī refers to this view of freedom as the modern form of idol-worship [10], eliminating God entirely from the equation by replacing Him with individual desire. This has inevitably led to an extreme focus on a person’s rights and a neglect of his/her responsibilities, moral or otherwise.

This naturally creates a problem for Muslim communities in Western societies because of the infiltration un-Islamic concepts. If people consider their own desires and wishes to be above the wishes of God Himself, they will naturally reject the notion of other human beings enjoining them towards good and forbidding them from evil, seeing it to be an unwarranted assault upon their personal choices.

Often the argument is raised – often unfortunately by Muslims themselves – that judgement is the prerogative of God alone, and no human being has the right to tell another what to do or how to behave. There is no doubt that this type of thought is influenced by liberal ideology and does not originate from Islam, as there exists an abundance of traditions within Islamic scripture emphasizing the importance of enjoining the good and forbidding the evil and explaining its proper methodology and boundaries. Furthermore, as has already been established, the concept of enjoining the good and forbidding the evil has its roots in our primordial nature and is confirmed by the intellect. For this reason, it is of great importance for Muslim communities, particularly in the West, to be aware of these ideological differences. With this awareness, Muslims will be able to make their worldview and actions more in line with Islamic teachings and thereby more pleasing to God, as well as avoid unknowingly rebelling against core Islamic principles.

The goal of enjoining the good and forbidding the evil is to spread goodness and suppress evil, to the point where justice prevails in our communities and transgressions against God are eradicated. This is the ultimate outcome of the correct observance of this divine ordinance and the very reason it was made incumbent upon Muslims.

Islam considers spiritual wellbeing to be equal to, if not more important than, physical wellbeing when taking into account an individual’s actions. For example, the same way one would naturally seek to prevent another from the physical harm of consuming poison, one should also be concerned with preventing individuals from undertaking actions damaging to their souls, such as disbelieving in God. According to the Islamic perspective, preventing someone from spreading false and corrupt ideologies is the metaphysical equivalent to this, as it prevent spiritual damage to the community

“Allah has made obligatory… enjoining the good for [the good of] the common people and forbidding the evil in order to deter the mischievous.” [11]

In the above tradition, Imam ʿAlī (AS) is pointing to the wisdom behind the obligation of enjoining the good and forbidding the evil. Almighty God has revealed a set of divine laws which are without fault or flaw for the purpose of establishing a perfect and just society. However, because human beings have free will, it is inevitable that some people due to their ignorance or obstinacy will break those laws. This is why God has also specified a set of rewards and punishments in accordance with human actions. Furthermore, God has made it an obligation for individual Muslims to regulate themselves, their families, and their communities, and this is achieved through the execution of enjoining the good and forbidding the evil. These two duties are necessary even if one is living in a society governed by divine laws.

The preservation of an Islamic identity within Muslim communities in the West is of paramount importance. Co-existing peacefully within a non-Islamic country does not mean abandoning the divine values of Islam in order to assimilate into society. Rather, Muslim communities must firstly understand the value of the divine religion and the immense blessings which have been bestowed upon humanity by Almighty God; and secondly, they must strive to protect the Islamic community from deviations, whether in belief, morality, or behaviour. Just as it is important to protect a community against crime, it is of greater importance to protect against deviant thoughts and behaviours which lead to the deterioration of the Muslim community and, ultimately, the complete eradication of the Islamic identity.