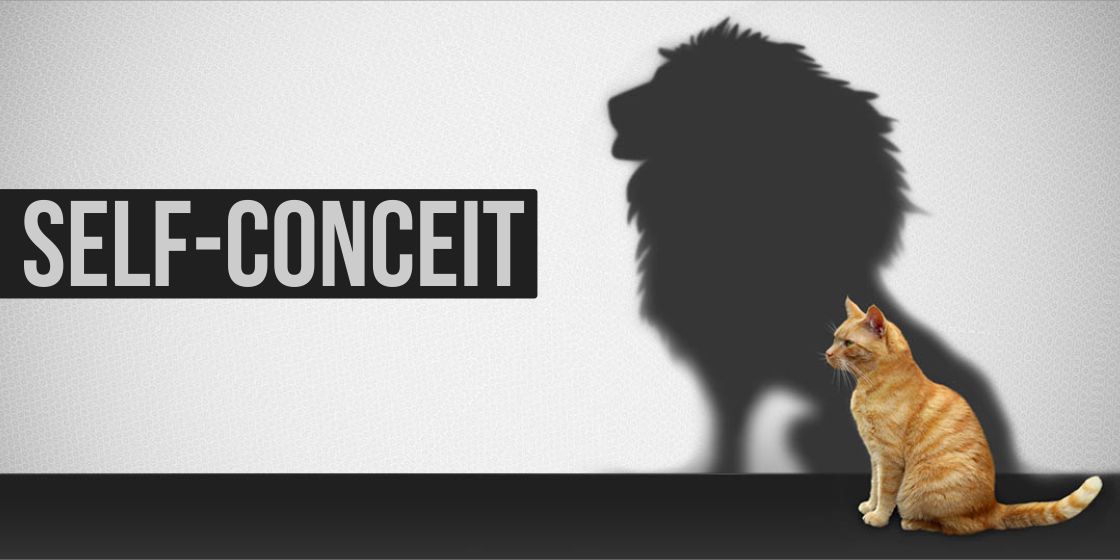 ‘Ujb (self-conceit) is one of the greatest diseases and vices that prevent a person from elevating spiritually in all aspects of their life. It is a vice triggered by the faculty of anger (al-quwwah al-ghaḍabiyyah) when it is not kept in moderation – which would have subsequently resulted in humbleness and modesty.

It is a trait that not only acts as a spiritual barrier, but also prevents individuals from seeing flaws and mistakes in their selves. In this brief piece of writing, an attempt has been made to summarize the discussion on ‘Ujb from the masterpiece of ‘Allamah Muḥammad Mahdi Naraqi (d. 1795), namely, his Jami’ al-Sadāt. This summary will be presented in two articles: the first discussing the definition of conceit, its harms and a general cure for it. In the second article, we will expand on how conceit effects specific areas of our lives and their relevant remedies.

‘Ujb is when an individual magnifies their own virtues and good deeds (whether they truly possess them or not) and considers themselves superior due to these traits. This is not accompanied by any sense of humility or humbleness and neither does the individual consider these to be favours of Allah (swt) bestowed upon him. Another type of it is when one starts to see their bad traits and deeds in positive light.

Many may confuse ‘Ujb with Kibr (pride), but there exists a minute, yet significant difference between the two. Kibr is one of the effects and off-springs of ‘Ujb. In ‘Ujb, it is enough that a person considers themselves to be special, whereas in Kibr not only does a person consider themselves superior, but they go out of their way to undermine others. It is possible for one to consider themselves special, but at the same time consider certain others to be superior than themselves, and this would constitute as conceit.

A greater extremity of ‘Ujb is reached when a person believes that they have some sort of a right upon Allah (swt). This is when a person has expectations from Allah (swt) to fulfil his or her requests or prayers, due to the good traits they possess or the actions that they perform. It is as if he or she feels that they have done Allah (swt) a favour. If their prayers or requests are not accepted, they complain to Allah (swt), or they get upset at him and feel surprised. This type of ‘Ujb is referred to as Idlāl1.  Idlāl is also when one has an expectation to be rewarded for his good deeds, as if what he or she had performed was up to the mark, and that there is no way that such worship or good deeds would not be accepted.

Different scholars have approached the discussion on ‘Ujb in different ways. Some have dissected ‘Ujb into different stages on a scale of extremity and then discussed it, whereas some have discussed it by taking a look at different aspects of one’s life. In this brief writing, the content will essentially be following the method used by Allamah Naraqi in his Jami’ al-Sadāt.

After briefly defining what ‘Ujb is, it would be appropriate to glance over a few narrations that speak about it either directly or indirectly.

Narration #1: Imam Ṣādiq (as) has said: ‘In whoever conceit enters, he is destroyed.’2

Narration #2: The Prophet (pbuh) has said: Allah, the Most Majestic, the Most Holy, has said, ‘…Among My believing servants there are those who strive to worship Me. They wake up from sleep leaving their comfortable pillow for Tahajjud. They experiences fatigue and I allow slumber overcome them on one or two nights, a trial from Me to see if he continues, he goes to sleep and wakes up upset and angry over his own self. If I allow him to do the way he wants to worship, he may develop a sense of conceit that can lead him to mischief in his deeds. This may bring about his destruction…’ 3

The term destruction can be consistently linked to conceit in numerous narrations. One possible meaning of it could be that it is referring to the destruction of one’s soul, in the sense that it goes through a transformation. It is a transformation that results in the soul becoming ruined and corrupted. It makes sense then as to why scholars have stated that conceit is one of the hardest vices to get rid of, as it requires one to break the idol of the self. It is difficult because once a transformation takes place, where one thing transforms from one state to another, it is hard to bring it back to its original shape and form. In this case, the impurities that one pollutes their soul with (due to conceit) are often hard to purify. The second meaning of it could be the punishment that one will receive on the Day of Judgement as a result of their conceit. Of course it is possible that the narrations imply both these meanings simultaneously, but nevertheless, it alludes to what one will have to face as a result of their actions in this world. This is true for all deeds, but with the general negative connotation that is attached to the word destruction (such as censure and degradation), it may also possibly refer to the severity of the punishment that one will face in the hereafter.

The next narration highlights of Satan makes us vulnerable to self-conceit:

As alluded to in the narration, self-conceit starts very casually, and in fact there is nothing apparently showing that would make us remotely assume that we are conceited. We carry out our acts of worships and other good deeds, but Satan sees these as a means to dislodge our feet. He whispers at us at one point or another saying that we must be careful and dedicated with our duties and obligations, sometimes even pushing us towards doing acts that are merely recommended. It is at this point, that he will whisper to us and make us inclined towards making comparisons with others so that we feel good about ourselves. We will start to feel as if we have every reason, whether rational, religious, or cultural to consider ourselves great Muslims or humans in general.

In this next narration the Imam (as) sketches a metaphorical representation to help us better understand the process of how we become victim to these diseases so we may contemplate on them and find a solution for ourselves.

Narration #4: Imam Ṣādiq (as) said: ‘…`Ujb is a plant, it’s seed is Kufr, it’s earth is hypocrisy, it’s water is transgression, it’s branches are ignorance, it’s leaves are misguidance, and it’s fruits are a curse and an eternity in hell…’ 5

Here, conceit has been symbolized as a plant, that grows out of a seed that is Kufr – often translated as disbelief. Therefore whoever adopts ‘Ujb has essentially sowed a seed of Kufr.

Some consequences of ‘Ujb are resorting to Kibr, forgetfulness, taking sins lightly, and not putting in an effort to learn more about sins and their effects while assuming that Allah (swt) will simply forgive the person.

Once an individual becomes arrogant, and starts to be conceited with their opinions and intellect, they do not ask, utilize or consult others who are more knowledgeable than them. If they happen to act on a flawed or mistaken opinion, they still feel good about it. This course of action surely leads one to destruction.  This happens because one of the consistent factors that accompanies this individual is the sight of their deeds being beautiful. Allah (swt) has said in the Qur`an that these type of people will be the greatest losers:

[18:103-105] Say: Shall We inform you who will be the greatest losers in their deeds? Those whose striving goes astray in the life of the world, while they think that they are doing something good. They are those who disbelieve in the signs of their Lord and in the encounter with Him. Therefore their works have failed, and on the Day of Resurrection We shall not assign to them any weight.

These individuals, while in a state of delusion, are proud of their deeds, and think highly of themselves because of those deeds. Instead of admitting their flaws or mistakes, or the fact that they have acted upon something rooted from a flawed methodology or opinion, they believe they are individuals who are open-minded and of liberal thought and that what they did is in fact good or progressive. They don`t feel any regrets over their mistakes. In reality, it would have been better that they had not been conceited in their opinions so that it would not have led them to their destruction. It would have been better for them to ask those who have insight, and are more knowledgeable than them to guide them. But, alas, conceit makes the person believe that they do not need to put any effort and struggle in understanding the religion, and they are content with what they know.

First and foremost, the ultimate cure for `Ujb is piety and God-consciousness (taqwa). We need to make a constant effort to recognize our Lord and realize our worthlessness. We should realize that our existence itself is only a possible-existence and that we came from nothing but an impure “sperm drop” (Qur’an 80:19) and our destination is a pit in the earth.

After death, one of the things that our souls will regret is conceit. It has been reported in a tradition by the Prophet (pbuh) that when an enemy of Allah (swt) is taken to his grave, he keeps saying to those who carry his coffin, ‘…I complain before you against the worldly attractions that made me a conceited person, so much so that I felt satisfied with them; they destroyed me…’6

Thus we should seek refuge and forgiveness from Allah (swt) constantly. Imam ‘Ali (as) in his famous letter to Mālik al-Ashtar orders him to maintain taqwa, then later specifically asks him to beware of `Ujb. He (as) says that it is one of the doors through which Satan can destroy the good deeds of a person:

Beware of self-conceit, trusting in what pleases you of yourself, and approving to be praised because this is one of the most important opportunities for Satan to obliterate the good deeds of the virtuous.7

Someone who realizes their reality, how can they have the audacity to be conceited? Whenever we do any act, we should stop and ponder over whether what we did was really out of sincerity or not. Was the act for the sake of Allah (swt) or did we do it thinking we were doing Him a favour? Consciously thinking about our weaknesses and the need to improve, remembering death often, repenting, supplicating to Allah (swt) asking for His Assistance and gaining true knowledge are all ways to save ourselves from conceit and also strengthen our God-consciousness. Of course attaining true God-consciousness is a lengthy process and it is not easy. sexpromo The goal is to reach a level where refraining from conceit becomes a disposition and we rid ourselves from this disease for good by being modest and humble.

God Willing, in the next article, we will cover specific areas of life where conceit effects us and the remedies for it. This includes aspects such as being conceited in knowledge, in worship and obedience to Allah, in one’s lineage, beauty, wealth etc.