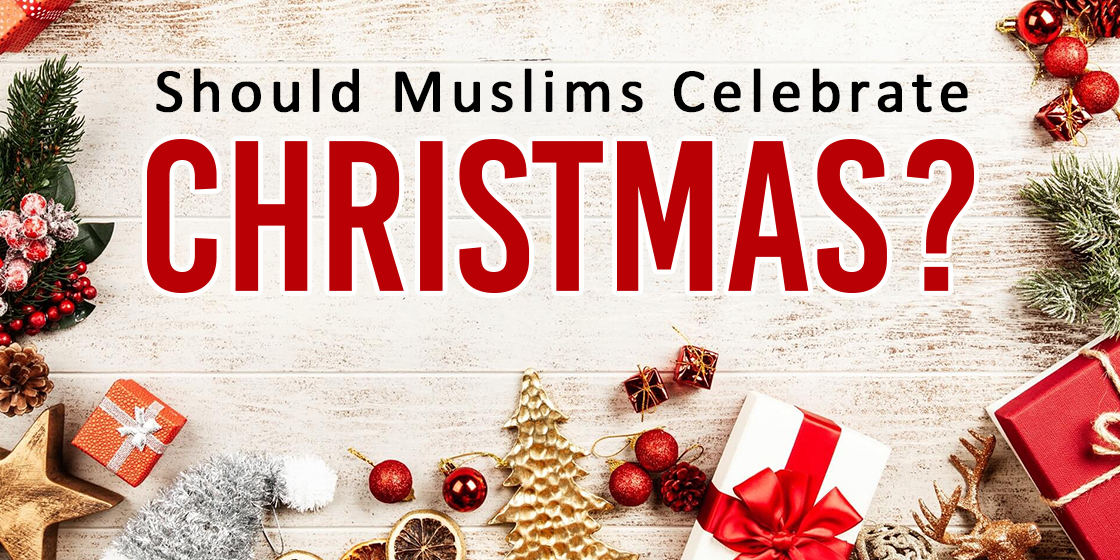 But Jesus was a Prophet of Allah! Should we not join in on the celebrations and festivities so we too can mark the day of the birth of a great Prophet of Allah? It is undisputed that Nabi Isa (as) was among the 5 ‘Ulul ‘Azm prophets and held a very high station. He is mentioned 25 times in the Holy Quran while the Holy Prophet Muhammad (saw) is mentioned 4 times and mentioned once by the name ‘Ahmad’. Furthermore, the 19th chapter of the Holy Quran is named after the mother of Nabi Isa (as); Bibi Maryam (sa). Simply put, the virtues and merits of Nabi Isa (as) and Bibi Maryam (sa) are countless, and Muslims revere and highly respect them both. But what about Christmas? While many have pressed our scholars regarding the Islamic jurisprudential opinion on the celebration of Christmas, or in other words, “can we celebrate?”, we seek to delve into the reality of the holiday and ask instead, “should we celebrate?” Our issue is certainly not with celebrating the birth of Nabi Isa (as), as has already been established, but rather, with this particular holiday and what it truly represents. In this article, we seek to understand whether we as Muslims should take part in Christmas festivities and we will do so by examining the history of the holiday, how it is celebrated today, and finally, we will analyze the Prophet’s attitude towards cultural appropriation and the acceptance of non-Islamic rituals.

At the outset, one must question the significance of the 25th of December. Historically, what does this date signify? There is a dispute amongst historians and scholars of religion with regards to the origin of Christmas and the reason for why it is celebrated on the 25th of December. One of the strongest arguments in opposition to the Christian narrative of this date signifying the “Nativity” (birth of Jesus), is that this was the date when the Pagans in Rome would celebrate the birth of the sun…not the son of God, and these celebrations date back to 274 CE. This is admitted by the likes of the Syriac bishop Jacob Bar-Salibi who wrote on this matter in the 12th century saying, “It was a custom of the Pagans to celebrate on the same 25 December the birthday of the Sun, at which they kindled lights in token of festivity”. Many of the rituals that the Pagans would use to celebrate the birth of the sun during the days after the winter solstice are very similar to Christian Christmas rituals such as burning candles, mistletoe and holly berries. After Christianity became the state religion, they took this celebration which was still popular amongst the adherents of the Pagan religions and evangelized it. Furthermore, it may be interesting (but not necessarily related) to note that Sunday was known as the day of the sun and the Church made Sunday a day of rest to appease the Pagans of the time, not because they were following scripture. Thus, the date of Christmas was a day of celebration for Pagans before any mention of celebrating the birth of Nabi Isa (as). Moreover, Allah (swt) says in Sura Maryam with regards to the labour period of Bibi Maryam that an angel commanded her saying, “Shake the trunk of the palm-tree towards yourself and fresh and ripe dates shall fall upon you (19:25). This indicates that Nabi Isa (as) was born in a summer month since dates ripen in the summer. Our purpose in bringing forth these arguments is not to claim that this date is not when Nabi Isa (as) was born, but rather to shed light on the history of this date and the historical evidence claiming that many Pagan rituals and traditions, including Christmas, had been co opted by the Christian Church and stem from Paganism as opposed to Divine scripture. Of course, a group of scholars of Christianity have come forward with their research which implies that the birth of Christ was being celebrated on the 25th of December before the Pagans and that this date is accurate according to their “Calculations theory”. For the sake of argument, we will accept that there is no clear conclusion to this discussion even if there is more evidence indicating that the 25th of December began as a Pagan holiday and that Nabi Isa (as) was not even born in the Winter.

Secondly, even if we were to cast aside the historical background of the date that Christmas is celebrated, we cannot ignore the way that it is celebrated worldwide today. It is undeniable that “Christmas spirit” caries along with it the strongest scent of consumerism and commercialism. If the claim of Christians (and the avid Muslims) is that this holiday marks the birth of the saviour of mankind (or Prophet of Allah, for that matter), then why are the walls being coloured and decorated with materialism instead of spirituality? We had accepted with difficulty that December 25th is the birthday of Nabi Isa (as), or were at least going along with that argument because there is nothing wrong with choosing a day to celebrate Holy personalities when there is no textual evidence to prove their dates of birth. But, how are we to reconcile the concept of celebrating such a Holy occasion with the commercialism that represents Christmas? Is the holiday really about a spiritual connection and celebration of a man of God and a righteous Messenger, or is it about a fake sense of joy that is created through temporary, material and excessive gifts and decorations? There is nothing wrong with giving one another gifts on happy occasions and it is in fact highly recommended to do so according to our narrations, however, the culture of having to out do others and throw the best Christmas parties and have the brightest lights etc. are all indications of a capitalist disease (not to mention the money that is spent to uphold innovations in the Christian tradition such as Santa Claus and his ilk). It is not hard to understand how many non-Christians can easily adopt Christmas to be their own holiday and feel comfortable with celebrating a holiday that does not stem from their own culture or religion because the holiday no longer holds any religious significance on a grand scale. Children will connect Christmas movies, lights, evergreen trees, a fictious jolly bearded man riding on a sleigh pulled by mythical creatures etc. to Christmas before the Nativity, church, or the “son of god”. For the sake of brevity, we will skip over the other ways that Christmas has been tainted by worldly pleasures including sexual promiscuity completely purging the holiday of anything holy or saint-like as the instances of such filth are plastered everywhere in the form of songs, movies etc. and thus do not require elaboration here. Therefore, the Christmas that is celebrated today is more of a celebration of wealth, materialism and hollow joy, almost totally void of the spirit of “Christ” or anything metaphysical at all for that matter. So, if one truly wants to celebrate the birth of Nabi Isa (as), the current way that his “birth” is being commemorated stands far from both [real] Christian and Muslim values and morals.

Lastly, we do not want to conclude that Muslims should or should not celebrate Christmas and partake in the festivities before we examine how the Holy Prophet (saw) himself confronted such scenarios. Firstly, the Prophet (saw) was approached by a group of former polytheists who had recently converted, and they came asking for a few favours. The first was to be exempted from destroying their idols, the second was to be exempt from prayer, and the third was to be permitted to continue performing adultery and fornication. The Prophet (saw) immediately refused all three offers and made it very clear to them that Islam has its boundaries and all that which falls out of those boundaries is not Islam. Thus, we can see that the Prophet did not make compromise or find any middle ground with those that wanted to adopt non-Islamic rituals. Next, a group of polytheists (not converts) approached the Prophet (saw) offering him a deal wherein the two groups would switch between worshipping the One True God and the man-made idols. In this way, the polytheists were seeking to make peace and find a middle ground between the two religions. The response of Allah that was delivered to the polytheists through the Prophet (saw) is Sura Kafirun. The Prophet (saw) informed them that there would be no such adoption of their rituals and, “to you your religion, and to me my religion” (109:6). Thus, the attitude of the Holy Prophet towards cultural appropriation when it crosses the boundaries of Islam becomes apparent. Our Eids are not celebrated by other faiths and there is no insistence that a Christian or Jew be permitted to pray the Salat al-Eid. So, why is there so much of a desire to adopt the culture, and religious rituals (if you accept that Christmas truly even falls under that category) of other faiths? In fact, one should pose this question first and foremost: Are we celebrating for Nabi Isa or to assimilate and to take part in Christian rituals? Do we really buy an evergreen tree to celebrate a prophet? Perhaps the avid Christmas-loving Muslim is only captivated by the material aspect of Christmas and is using the “prophet of Allah” factor as an excuse. For if a Muslim truly cared about this holiday for what it is truly meant to be, why is the excitement and joy leading up to major celebrations such as Eid or the birthdays of our A’immah so minimal? Thus, we can pull two conclusions from what has just been presented: The first point was regarding the refusal of the Prophet (saw) to accept non-Islamic rituals/culture, and the second was a question regarding why Muslims feel the need to celebrate the celebrations of other faiths when they have a plethora of their own.

To conclude this brief analysis, it is important to note that there is no issue in wishing Christians well during this time of celebration and joy and it would even be useful for Muslims to make Christmas cards which contain verses from the Qur’an about Nabi Isa (as) and Bibi Maryam (sa) and give it to their Christian friends as this would serve to be a great form of tabligh. We did not want to include the fatawa of the maraje’ regarding the prohibition (hurmat) of imitating the culture of the disbelievers and the enemies of Islam as we would like to leave the deduction of the instances of such rulings to the readers. This article was not meant to be a jurisprudential analysis nor was it meant to provide a legal answer (i.e. yes or no) to the question of “can I?” but was rather meant to make the reader ask him/herself, “ should I?”, as was mentioned in the beginning. There really is no need to partake in the celebrations of other religions especially if partaking involves decorating one’s house with symbols of another religion. Furthermore, there are so many different happy occasions lined up on the Islamic calendar and so many of them are not given their due respect. Even if one can conclude and truly justify the legitimacy and permissibility of celebrating Christmas, this question still remains: Should a Muslim celebrate this occasion? Keeping in mind all the points that were mentioned throughout this article, even if it is permissible to celebrate, is this really a holiday that a Muslim should be involved in? We leave the answer to the readers.